The emerald is one the most cherished and coveted gemstones on this planet. These magical gems came into existence as miraculously as it looks. They are made up of a variety of the mineral beryl and they get its hue from chromium and vanadium. The stone is formed deep under the earth’s surface when it is exposed to the right temperature and pressure.

These are much sought after gems and sometimes it’s value even exceeds diamonds. Selectors prefer slightly flawed emeralds over flawless ones as they are trusted to be authentic. What draws people towards this stone is its entrancing green color. This green is not uniform across all stones, therefore, emeralds come in a variety of shades that can fit different styles and craftsmen.

Emeralds have always held a significant place in history and mythology around the world. In ancient Rome, the Emerald was believed to be the stone of goddess Venus who is said to represent hope and love. Many believe that it imprints will-power, harmony, peace and becomes a source of emotional strength to the wearer.

Colombian Emeralds are favoured around the world but they were first mined in the land that is now known as Egypt. Its mesmerizing green and shimmery streaks grasped the attention of Queen Cleopatra who later went on to adorn most of her jewellery with emeralds. Through history Emeralds have been valued for their charm and symbolism.

In India, Emeralds are found in places such as Jharkhand, Orissa and even Tamil Nadu. It is known as the Indian Emerald or Indian Panna stone. These gemstones instantly brighten up any room with their radiance and symbolic depth.

Emeralds are all-rounders as they can be fashioned into a magnificent spread of jewellery or something as humble as a pair of studs. Some also prefer Emeralds on their engagement rings.

Here are some takes on Emerald jewellery by Mehta. 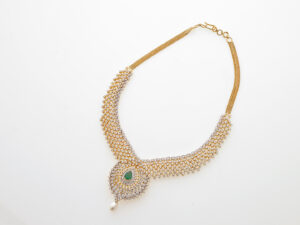 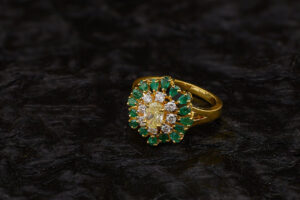 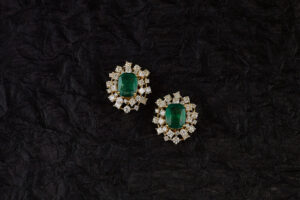